Where is the tenths place in a decimal

In this video, we’re going to learn about decimal place value.

As that name suggests, it’s related to regular place value,

so be sure to watch our video about that if you haven’t already.

In that previous video, we learned how to count using just 10 different digits

For example, if we needed to count 235 apples, we used different number places for counting by ones,

by groups of ten,

and by groups of a hundred.

The digit ‘2’ in the hundreds-place represents two hundreds,

the ‘3’ in the tens-place represents three tens (or thirty),

It’s a pretty amazing system if you think about it!

It only has 10 digits, but those digits can be re-used in different combinations to count any number from zero,

all the way to trillions of apples and beyond!

But!… as amazing as it is, there’s just one little problem with our number system so far…

What if you don’t have a whole apple?

In the Place Value video, we only learned how to count whole amounts, or what we call “whole numbers”,

And that means there are ‘in-between’ amount. You might have one apple or two apples,

but you could also have something in-between that, like one and a half apples.

How can the base 10 number system handle situations like that?

The answer is decimal places!

Decimal places are a way of extending the Base 10 number system so that it can represent amounts that are in-between whole amounts.

Decimal places are just like regular number places, except that

To see how the Base 10 system is extended with decimal places,

let’s look at the pattern of number places that we saw in the last video.

We started out with a number place for counting things one at a time.

And when we hit the limit of counting with it, we used another number place (on the left side of it) for counting groups of 10.

By combining those two number places, we could count from zero all the way up to 99, but when we needed to count beyond that,

we used another number place (on the left side of it) for counting groups of 100.

And when those places were maxed out, we added a place for counting by groups of 1,000,

Each time we added a new number place, it was located to the left of the previous one,

and each time it represented groups that were TEN times larger than the previous group.

Since the amounts that our number places represent get bigger and bigger as we go to the left,

will need to go on the right side of the ones place.

That’s where the decimal places are found.

And just like the whole number places can go on forever to the left, counting bigger and bigger groups,

the decimal number places can go on forever to the right, counting smaller and smaller parts (or fractions).

But… if number places go on forever in either direction, then how do we know which place is which?

I mean… if they all look the same… or worse… if they’re invisible,

then how do we know which digit goes in which place?

We do have a problem now that the number places can extend in both directions.

Before, when we had only whole number places that extended in just one direction (to the left),

we knew that the place that was farthest to the right was always the ones place.

But now we know that number places can extend in BOTH directions, so we need a new way to tell which place is which.

What we need is a point of reference… a place that we always start from.

And for that, we use a special symbol called “the decimal point”, which in the United States, looks just like a period.

Basically, the decimal point acts as a separator.

It separates the number places that are used for counting whole values, (which are on the left side of the decimal point)

from the number places that are used to count fractional values (which are on the right side of the decimal point).

And that’s why you don’t see a decimal point in every number.

If there’s no decimal digits in a number (like in the whole number 25), then you don’t need to show the decimal point.

It’s safe to assume that the digit farthest to the right is in the ones place.

Of course, you COULD still show the decimal point if you wanted to since it’s always immediately to the right of the ones place,

but if there’s no decimal digits, then we don’t need to separate them from the whole number digits.

If a number does have decimal digits, then we call it a “decimal number”

and the decimal point helps us quickly recognize which digit is in the ones place.

You can tell right away that the digit ‘6’ is in the ones place, because it’s immediately to the left of the decimal point.

And that means this ‘2’ is the tens place and this ‘1’ is in the hundreds place.

Okay… but what about the digits that are to the right of the decimal point?

Well, looking back at our number place pattern, we see that each time we move to the LEFT,

the new number place counts amounts that are ten times BIGGER than the previous place,

so each time we move to the RIGHT, that place should count amount that are ten times SMALLER than the previous place.

Since the ones place counts by ‘ones’, the number place to the right of it should count by amounts that are ten times smaller than one.

The amount that’s ten times smaller than one is called “a tenth”.

It’s the amount you get if you take one whole (like one whole apple) and divide it into ten equal parts, keeping just one of them.

One-tenth is what we call a fraction, and fractions are written using a special notation that has two numbers with a line between them.

The number on the bottom tells how may equal parts a whole amount is divided into,

and the top number tells you how many of those parts you have.

So the fraction ‘one-tenth’ is written like this: one over ten.

Getting back to our apple counting example… previously, we could only count whole apples,

but now that we have a number place for counting tenths, we can count tenths of apples too.

We can use the ones place and the tenths place together to count amounts that are in-between a whole number of apples.

To see how it works, let’s start our counting with one whole apple and NO tenths.

That means that there will be a ‘1’ in ones place and a ‘0’ in the tenths place.

But now let’s start adding tenths to that. For each tenth that we count, we increase the digit in the tenths place by ‘1’

Let’s pause for a second to notice something important.

Do you see that having 5 tenths of an apple is the same as having one-half of an apple.

That’s why having 1.5 apples is the same as having one and a half apples.

Now we have one whole apple and also nine-tenths of an apple. But our tenths place is maxed out with the digit ‘9’.

That’s as high as it can count, so what do you think will happen if we add one more tenth?

Yep! Those ten tenths combine to form one whole apple, and that will cause our ones place digit to increase to a ‘2’.

We now have 2 whole apples (even though one is made up from slices, the amount is still equal to one whole.)

…more decimal number places that is.

The decimal number places keep on going to the right,

and each time they count amounts that are ten times smaller than the previous amount.

So if the tenths place counts fractions that are a tenth of ONE,

then the next place over will count amounts that are one tenth of A TENTH!

One tenth of a tenth is called ‘one hundredth’.

It’s the fraction you get if you take a tenth and then divide IT into ten equal parts.

It’s a very small fraction, and it’s called a hundredth

because it’s the same fraction you’d get if you take a whole and divide it up into 100 parts.

Just like tenths could be used to represent amounts that are IN-BETWEEN the ones,

hundredths can be used to represent amounts that are IN-BETWEEN tenths!

And the decimal number places keep on going like that.

The next number place over represents fractions that are one-tenth of one-hundredth.

That very small fraction is called ‘one-thousandth’ because it would take 1,000 of them to make one whole.

And the next place over is 10 times smaller than that; it’s called the ‘ten-thousandths’ place.

And then there’s the ‘hundred-thousandths’ place…

there’s the ‘millionths’ place, and so on…

So do you see how truly amazing our number system is?

It can represent any whole number amount, no matter how big, by adding bigger and bigger number places to the left.

But it can also represent amount in between those whole amounts, with more and more precision…

down to the tiniest fraction imaginable, by adding more and more decimal number places to the right.

“That is truly amazing!

In fact, it kinda makes my head hurt just thinkin’ about it.

Of course… it could be this daw-gone pot I wear on my head all the time.”

Okay, so now that you know how decimal places work.

Let’s talk briefly about how we can show their place value and how we can write decimal numbers in expanded form.

A digit’s value is determined by the place that it’s in.

And just like a ‘2’ in the tenths place stands for the place value ‘two-tenths’,

and a ‘2’ in the thousandths place stands for the place value ‘two-thousandths’.

Knowing that will help us write decimal numbers in expanded form… like the one we saw earlier: 126.53.

The expanded form of the whole number part is easy.

But now we need to add the fractions represented by the decimal digits too.

Since there’s a '5' in the tenths place, that stands for five-tenths,

so we need to add the fraction ‘5 over 10’ to our expanded form.

But we also have the digit ‘3’ in the hundredths place which stands for three-hundredths,

so we also need to add the fraction ‘3 over 100’ to our expanded form.

Alright… so that’s a basic intro to decimal number places.

There’s still more to learn about them and as you can see,

decimal number places have a lot to do with fractions, which you may not have learned very much about yet.

But that’s okay. Once you do learn more about fractions, it will help decimal number places make even more sense.

And there’s several Math Antics videos about fractions that can help you with that,

The main thing is you now know how the Base 10 number system works, which is really important since it’s used all the time in math.

As always, thanks for watching Math Antics and I’ll see ya next time. 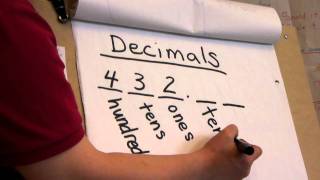 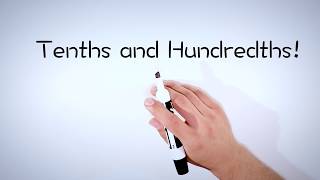 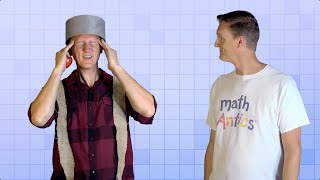 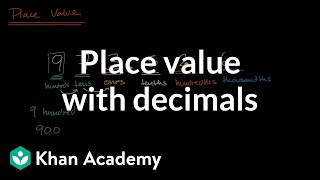 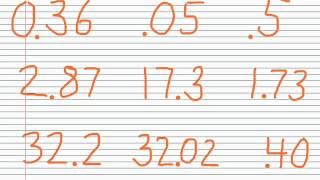 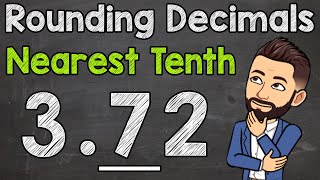 Rounding Decimals | Round to the Nearest Tenth 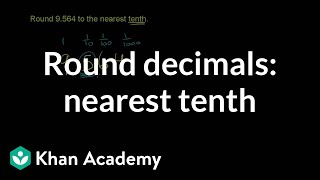 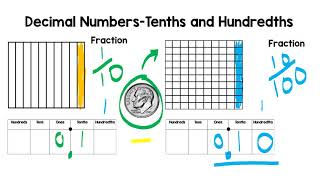 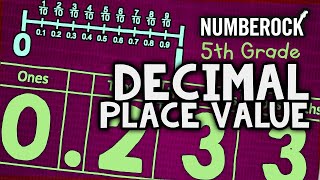 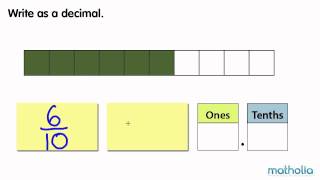 An Introduction to Tenths