Where is the energy stored in an atp molecule

Captions are on! Click CC at bottom right to turn off.

or cell transport…or a comic about cellular respiration or fermentation, you’ll see

So why the big deal?

Why is it all over the place?

Many times students will get in their mind that it is an energy currency of some kind.

When I first started studying biology, I noticed that in textbooks it’s often represented

as like this starburst thing or thunderbolt, and you know, I guess in my mind I imagined

it was like some big blast of energy that helped the cells do things.

And by do things, I mean that we need ATP to do many cellular processes.

ATP is critical for many types of cell signaling; you need your cells to be able to communicate.

Those are all just some examples.

But what is ATP?

How do we get it?

And…how does it work?

Those are the basics of what we’re going to focus on in this short video.

So what is ATP?

If you remember the four major biomolecules, ATP would fit in with the nucleic acids.

ATP is a nucleotide derivative so it has those three parts you’d see in DNA or RNA nucleotides:

phosphate, sugar, base, but it actually has 3 phosphates.

ATP is short for its full name, adenosine triphosphate.

as adenine, and three phosphates---hence the “tri” in adenosine triphosphate.

Its sugar is ribose.

How do you get ATP?

All cells need ATP and so they need processes that can be used to generate it.

But the process can differ.

It might involve oxygen such as aerobic cellular respiration.

It might not involve oxygen such as anaerobic respiration or fermentation.

During cellular respiration, plants break down the glucose they MADE from photosynthesis

During cellular respiration, animals break down the glucose they CONSUMED to make ATP

. And it's not just plants and animals; bacteria, fungi, protists, and archaea---they all need

to understand the process, but one thing that we do want to mention about making ATP is

that it is important to understand it is part of a cycle.

With the ATP cycle you have ATP, which can be hydrolyzed, releasing energy and losing

one of its phosphates in this process.

in order to regenerate ATP again, which is important as ATP can be used quickly.

This brings us to how ATP is able to work.

So how does ATP work?

It’s not just about ATP being hydrolyzed and releasing energy.

It’s more than that.

Ok, honestly, it’s more than our short video can go into, which is why we provide some

further reading links, but let’s look at some basics.

So when ATP is hydrolyzed, meaning here it involves the addition of water, it’s not

really that the bond between this second and third phosphate itself is a super strong bond.

to this ATP being unstable.

A popular example for understanding ATP is to use the spring illustration.

then you would let it go until it just goes into this relaxed state, which would be represented

When ATP is hydrolyzed, if the energy was just released, it will likely not be useful

for a cell if it’s not actually coupled to something that needs it.

Thankfully, the energy release can be coupled to endergonic processes that the cell needs

to be acted upon.

For example, this cell transport protein here is supposed to move some kind of molecule

against its concentration gradient.

Recall if it was passive transport, these molecules would be moving from high to low

concentration, but in active transport thanks to ATP, this protein can move them against

When the phosphate is transferred to this protein, we say the protein has been phosphorylated.

We can say, in our example, that this protein is more reactive and less stable in this form,

When it reverts into its original, more stable shape, it can assist in moving them the other

So from marveling at the beating of a single cilia hair, or chromosomes being separated

in cell division, or binding the correct amino acid on a tRNA, I could go on---we hope that

little ATP symbol will mean something every time you see it.

Well, that’s it for the Amoeba Sisters, and we remind you to stay curious. 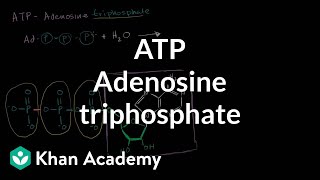 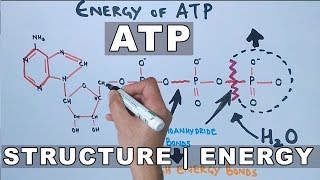 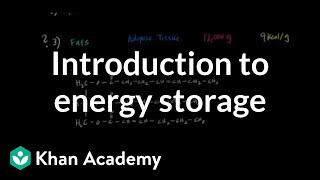 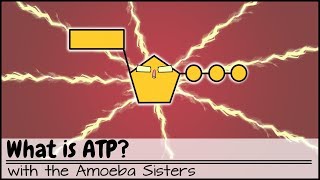 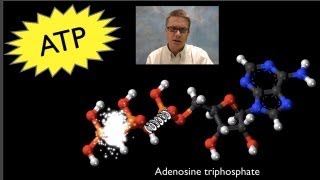 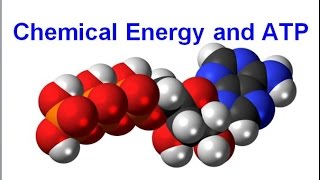 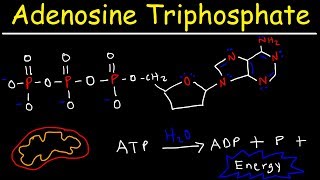 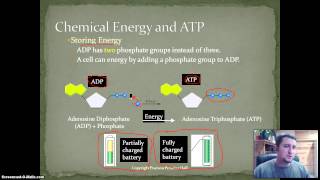 Energy in our Cells - ATP 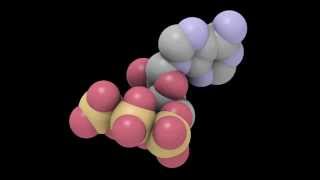 ATP: The Fuel of Life 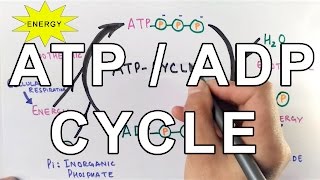