Where is the jefferson memorial located

Welcome to the Jefferson Memorial. The memorial is built in honor of the third president of

the United States; Thomas Jefferson. This site is one of the anchor points on the National

Mall, an area consisting of several monuments and historic buildings in Washington DC. While

Jefferson was one of the earliest US presidents, it is not what he is most famous for.

Thomas Jefferson was born year 1743, being the third of eight children in one of Virginia's

most respected families. Already at the age of nine, Jefferson began studying French,

Greek and Latin. Through his college years he also studied mathematics, metaphysics and

philosophy, finishing all classes with excellent grades. Thomas Jefferson was known for his

diverse interests and high intelligence. After his father died, Jefferson inherited a dozen

of slaves and around 5,000 acres where he later would build his grand estate, the Monticello.

After finishing his studies, Jefferson began working as a lawyer while he at the same time

became active as a Virginian politician. He protested against the new laws and acts the

British rule imposed on the colonies. Jefferson argued that the colonists had the natural

right to govern themselves. Soon after the outbreak of the American War of Independence,

Jefferson was made responsible for creating the famous Declaration of Independence.

The declaration of Independence is what Jefferson is most famous for. He did however have a

to France, Vice President and finally President. After his presidency he participated in the

planning of the university. Jefferson died on the 4th of July 1826. By then he could

look back on his life as a large land owner, political philosopher, architect, musician,

the United States. He is by many held as the most intelligent and intellectual US president

The process for building a memorial on the site began in 1925, when a design competition

for a presidential monument was held. The president in question was however not Jefferson,

but another famous president -- Theodore Roosevelt. The winning designer was John Russell Pope,

but his plans were never funded by the congress which put the project on hold.

The next time a memorial was brought on the agenda was in 1934, when an admirer of Jefferson,

President Franklin Roosevelt, suggested a memorial of Thomas Jefferson to build on the

site. This time the congress did accept the project and gave it 3 million dollars. The

ago; John Russell Pope. The construction began in late 1930ies and

Roosevelt on April 13th 1943, the 200th anniversary of Jefferson's birthday.

As you can see, the inside of the memorial is rather minimalistic and dominated by a

large bronze statue of Jefferson himself. The statue was completed in 1947, later than

scheduled, as the Second World War caused a shortage of bronze. The interior of the

memorial is made of Georgia marble and limestone, which gives it its distinct white color.

of several famous texts written wholly or partly by Jefferson, such as "A Bill for Establishing

Religious Freedom, 1777" and parts from letters Jefferson wrote to the leaders of the time.

You can read an extract from the Declaration of Independence on the southwest wall, the

one facing the back of Jefferson's left arm. The memorial is one of the last American monuments

built in a typical neoclassicism fashion with origin in ancient Greek architecture. The

architect John Russell Pope intended the design of the memorial, loosely based on the Roman

Pantheon, to reflect Jefferson's ideals of freedom, independence, and equality. The memorial

is also believed to have been inspired by one of Jefferson's own buildings, the University

of Virginia, as the two buildings copula and main entrance is very similar between. That

way one can say that Jefferson contributed in the construction of his own memorial.

The project wasn't all that popular during the construction phase. One reason was that

way for the new building. The Commission of Fine Arts also never actually approved any

new construction on the site, which further caused controversy.

Today however, the Jefferson Memorial is a popular site, both for locals and for typical 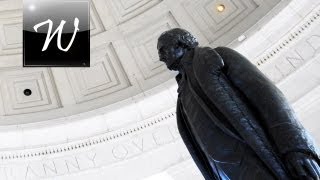 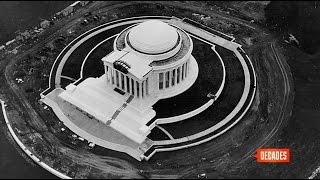 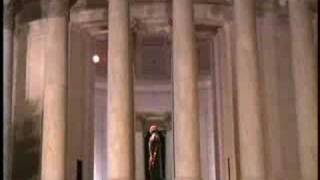 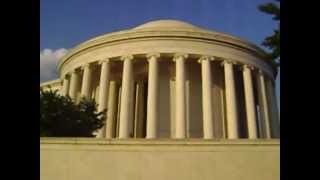 Short Documentary about the Jefferson Memorial 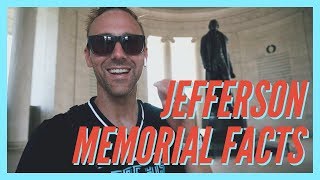 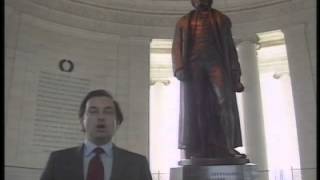 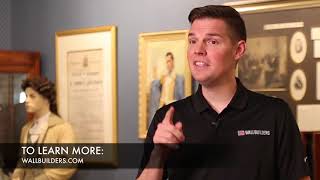 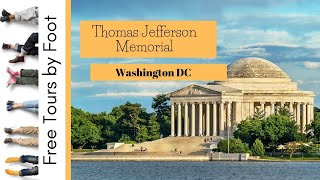 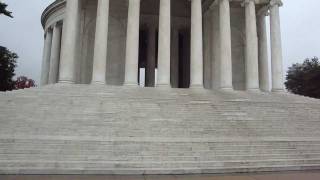 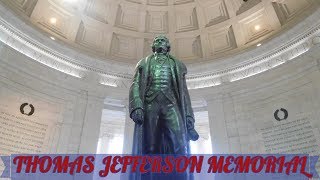