Where is the balkan peninsula located

Hey everybody so as you know, I'm working on the scripts for the next few country episodes

Which means it's gonna be a filler week! Heavily requested but never really fulfilled until now

AKA Europe's most dysfunctional family

before we get into this though

Seterra is a geography learning game.

Seterra. Thank you. Anyway back to the Balkans

Now if you look at the map of southern Europe

Basically, this place has a lot of weird history. Everybody loves and hates each other

These two countries can understand each other when they speak, as can these four,

but they all swear it's distinct different languages

Generally, they're all kind of cool with each other

Hey, I've traveled to Albania and Turkey, the nations of our enemies and yet they were like totally treated fine by the locals

Quick historical context, this entire area at one point was ruled over the Ottoman Empire

then during the 20th century half of it was Yugoslavia

What exactly are the boundaries of the Balkans?

Apparently the Balkan Peninsula is surrounded by the Adriatic Sea to the west,

Its northern boundary is often given as the Danube, Sava, and Kupa rivers

Or the Balkan and Dynaric Alps mountain ranges

The countries that lie entirely in the area include Albania, Bosnia and Herzegovina

As well as the disputed, partially recognized Kosovo area

and parts of Croatia, Serbia, Slovenia, most of Greece and a very small part of Romania, Turkey, and even Italy

In this episode though, we're just gonna talk about the major Balkan nations that are either completely or mostly located within the Balkan area

So no Italy and I talked to some Romanian people and a lot of them said "Nah, we're not Balkan,

We're just our own thing in southern Europe."

So I'm not gonna talk about Romania. And with that being said, let's start off alphabetically, Albania

Oh, Albania was one of the first episodes I made. That was so long ago.

Out of all the Balkan nations, Albania is probably like the one that sticks out like a sore thumb the most

It's like the oddball that doesn't quite fit in

It's like the emo kid at the dinner table

I mean, come on Albanians. Let's be real, Enver Hoxha, he was a little intense

About half the country is Muslim

Today however, they are completely opened up and a lot of like intrepid Europeans like to travel here

because there's a lot of like secret hidden beaches

Everything here is cheap. They are a candidate to join the EU

However, they still have some political obstacles that they have to overcome in order to join and uh yeah

Which we will explain in a bit

This is the most confusing political entity in, I would argue, the entire world

just watch the episode if you want a recap, but basically they have three constituent people groups

No other country has this. Maybe kind of Comoros, but that's a little different

And it's weird because like, everything here comes in threes.

The Bosnians or Bosniaks are mostly Muslim

The country is divided into three parts

This all happened because after the breakup of Yugoslavia, there was a Bosnian war yada yada yada

and here we are

and even weirder, they all pretty much speak the same language

But they are very keen to make sure that they distinguish that it's Croatian, Serbian, and Bosnian

The country is almost completely landlocked

But they have this small little twenty kilometer long coast on the Adriatic. But yeah for what it's worth

They have a really cool art and music scene. They hosted the Winter Olympics in Sarajevo

and yeah, interesting place that not a lot of people talk about, Bosnia and Herzegovina

Ah, the land of roses. Every time I get something sent in from Bulgaria for fan mail,

it always usually includes something made out of roses.

Slowly withering beauty. Here's the thing like Bulgaria is loaded with lots of cool

you know natural sights and wonders and culture,

but like a lot of people are just leaving. Since the early 90s, about a quarter of their entire population has left

They're proud of being known as the place where the Cyrillic alphabet was created by these two brothers.

They love their bagpipes

Technically they're descended from the Bulgars which like migrated from Asia

I mean they speak the exact same language almost. In fact many Bulgarians will say that Macedonians are just kind of like confused Bulgarians

Keep in mind though, their language is Slavic, but it is not intelligible to the Serbo-Croat Bosnian languages

Croatia. Our third Slavic nation. Croatia is kind of like "the one that got really lucky"

It's the land of the best Balkan sunsets. All those Game of Thrones locations

Whereas the rest are predominantly Orthodox, you see a lot of Italian and ancient Roman influence here.

Lots of Italians even live here

They are seafaring folk

thousands of islands and rocks off the coast

Their tourism sector has just been exploding. So many cool natural and man-made sights. Huge music and art scene here

In fact, one of my favourite bands 2 Cellos was started here

And yeah, overall they've pretty much moved on from war times and they've built up quite a reputation Croatia

Greece. We all know this one. Very few countries love their culture and history and background as much as Greek people do

Greece is kind of like the master of history and the remnant to the ancients, the cradle of western civilization

Now, they're known for being loud dancing party animals. Sorry. It's... Come on, Greeks, you know it's true

Like Albania, they are a linguistic anomaly. They have no other cousin languages

However, it's interesting because Koine Greek was the lingua franca of the Roman Empire

They are a seafaring powerhouse! Over 6000 islands and the 11th longest coastline in the world

I'm not going to get into the whole economy and EU drama thing. We all know about it

We'll talk about the North Macedonia thing in a bit. But for what it's worth. Yeah, Greece is popular

They love Serbians and Serbians love Greece. They've worked historically alongside each other a lot

If you ask a somewhat nationalistic Serbian they will probably say

If you ask a Kosovar, they will probably say

But then Serbia will say, "yeah, but not a full participating member state"

"Plus there's a lot of Serbian history and cultural sites in Kosovo."

"Okay, well, we're still pretty much in every sense a country. Even your government recognizes our administration"

"Well, you can claim whatever you want, but no, you're not a country"

And it goes on. Whatever you want to claim Kosovo is, it's basically like Albania's little brother

The majority of people in Kosovo are Albanian. There's a huge war in the 90s after the breakup of Yugoslavia

There is a Serbian minority in Kosovo, which is where a lot of the conflict centers around

Whatever you want to consider Kosovo as, basically

But yeah, probably the biggest controversy of the Balkans

I had so much fun making the Montenegro episode because

I had no idea how hilarious their reputation was amongst the Balkans.

If you didn't watch the episode, basically, Montenegro is the sleepiest country on Earth

Probably because they were sleeping and missed the deadline

They speak pretty much the same language as Serbians, Croats, and Bosnians, but they just have their own little Montenegrin accent

historically, they were known for being like really vicious fighters.

They get along with pretty much all of their neighbors

However, in the end, Serbia is just kind of like their best friend-ish

Like a lot of Montenegrins go to Serbia for education and job opportunities, and Serbia likes to use Montenegro for access to the sea

The newly named North Macedonia. Ooh, the country that must not be named

Other than Kosovo, this is probably the most controversial area in the Balkans

For the longest time, they had gone through a series of disputes and economic blockades, mostly against Greece

All because of the name

For the longest time, under the UN they were labeled as the Former Yugoslav Republic of Macedonia

Many countries called them the Republic of Macedonia

Greeks were not happy because the word Macedonia implies Hellenistic roots

When clearly the people of this area are... They're not Greek, they speak a Slavic language

I'm not gonna go further into this

Anyway, yeah, the people here are kind of like in a tug of war against everybody around them

I mean Bulgarians are kind of like "Come on, you guys are basically Bulgarians just join us"

Culturally, it's a huge mix as well

You have a lot of preserved Byzantine frescoes and paintings

Serbia! Oh boy, if you ask anybody in the Balkans, they all have an opinion on Serbia

Like, they kind of started and pushed the kingdom of Yugoslavia

They kind of started World War I and the Yugoslav wars.

Let's be honest, though. Yugoslavia was kind of like a collective effort. I mean Tito was Croat-Slovene

And the thing is, for the longest time, Serbia was actually a kingdom apart from the Austro-Hungarian Empire

Unlike Croatia and Bosnia which were part of it

Of course, they are another Slavic nation, they can understand Croatians and Bosnians.

Which is like one of their closest allies. That's a whole other thing

But I mean, there's a lot of history and culture here, too

Belgrade is like over 7,000 years old and it was actually Celtic before it was Roman

and like in a nutshell, they are such a key figure in the Balkans

And uh yeah, what else? Novak Djokovic

And finally, Slovenia. Slovenia is the richest and most well-off of all the Balkan nations

They have beautiful world-renowned buildings and monasteries

They don't like to cause any drama. They get along very well with Italy

There's a lot of Italians that live here, even though they're kind of pissed off that

Italy got the entire Trieste coast cutting off half of their access to the sea, but eh

Serbians, Croatians, and Bosnians kind of joke that Slovenians are kind of like the stuck-up people

and everybody else is like "ugh, you little wuss" but hey, they're rich, so they don't care

And that's basically it. There's so much I missed out on, I know I could have added a lot more

which is gonna be a beautiful place, and it's gonna have no controversy and no arguments obviously

For what it comes down to though, the Balkans is a place with lots of culture and history

People bringing something different to the table

In the end, they all love doing their shots of rakija and they can all agree

At least we're not under the Ottoman Empire anymore

This was fun. Hope you have a good one. Stay cool. Stay tuned 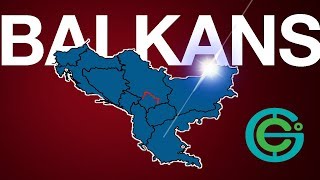 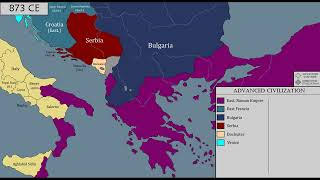 The History of the Balkan Peninsula

The History of the Balkans : Every Year 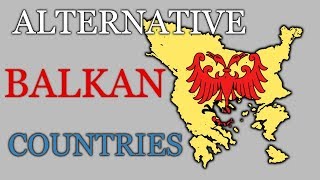 Alternative Countries of the BALKAN PENINSULA 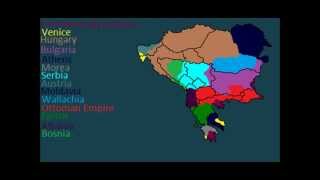 History of the Balkan Peninsula 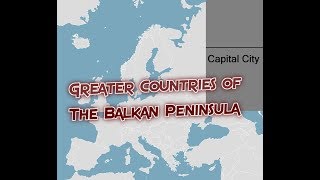 Greater Countries of The Balkan Peninsula 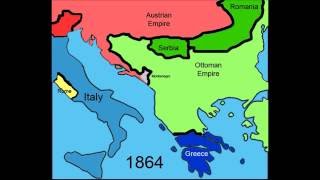 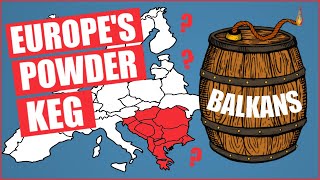 Why Are The Balkans Europe's Powder Keg? 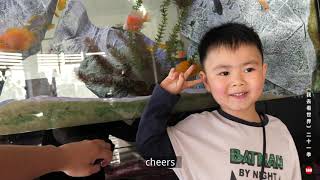 Balkan Episode 01: The Balkan Peninsula is really beautiful and cheap