Brought to you by 1AAuto.com, your source for quality replacement parts and the best

service on the Internet.

I hope this how-to video helps you out, and next time you need parts for your vehicle,

In this video, we're going to show you how to replace the front struts.

We show you on the driver's side, but the passenger's side is the same procedure and

we do recommend you replace them in pairs.

You'll need new front struts from www.1aauto.com, sockets from 8mm up to 30mm, a pipe or a breaker

Start off by prying off the hubcap.

Then raise the vehicle, and remove them the rest of the way and take the tire off.

Now pull the wheel off.

Now turn the wheel, and remove this 21mm nut at the top of your outer tire rod.

Then once you remove it, you want to just put it back on just a couple threads.

Now hammer the knuckle until the outer tire rod drops down.

Now you can remove that nut, and just set your outer tire rod off to the side.

Underneath your control arm, on the bottom of the sway bar link you want to just remove

You can try doing it with an 18mm ratchet, but most likely it's going to start spinning,

and the solution for that is an 18mm wrench and an 8mm socket and ratchet.

Then you can just remove that nut.

You want to spray the bolt that holds the bottom of your strut, and then a 30mm socket.

I'm using a breaker bar and a piece of pipe and break that free.

Then once you get it going, the bolt will most likely spin.

Hold the bolt end with the 27mm socket and take that nut off.

Then spray these 15mm nuts at the top of the strut with some penetrating fluid, and remove

two of them all the way.

The other one, you just want to leave on a few threads.

Using a pair of pliers, remove this cap.

Then loosen up and remove that 13mm nut.

Then you want to just put it back on just a few threads.

Tap it with a hammer and make sure it goes through.

Then remove the nut the rest of the way.

On the other end of the axle, there's a series of 12mm bolts.

You just need to use a 12mm 12-point socket, and then a pry bar to hold the wheel.

Just loosen those up.

You can also just have a helper get in the vehicle, and hold the brakes to hold the axle

When you remove that last one, just push the axle down to the side.

Now spray this 21mm nut up here on the bottom of your upper control arm.

Then remove that nut, and put it back on just a few threads.

Now with the nut back on a few threads, just hammer the wheel knuckle until the upper control

Now just lift up on the wheel knuckle, and then remove that nut.

Now you can just set the wheel knuckle off to the side carefully.

You don't want it to strain those brake hoses.

Then just tap the axle and pull it out of the wheel knuckle.

Then just angle it down, and pull it down and out.

Now, we're just going to check up underneath the control arm a little bit.

The vehicle is still supported on the jack stands under the frame.

Remove the bolt from the bottom of the strut, and you can see the struts in there are still

Make sure the nuts on the top of the strut are removed.

Pry the strut out.

Up top is the old strut.

Below it is the new one from 1A Auto.

You can see they're identical and they'll fit exactly the same.

Feed your strut up into place.

Push those studs through.

Then just replace those nuts at the top to just hold it.

You don't need to tighten them up right now.

You're just putting them there to hold it in place.

Then pry the bottom of the strut back into the lower control arm.

Then push that bolt back through.

You just make sure it's all the way in.

Then replace the nut and tighten it up preliminarily.

We'll just fast-forward as Mike goes back over those 15mm nuts making sure they're tightened.

Then you can remove the jack.

Feed your axle back into place.

You want to feed it back in the same way that you pulled it out.

Then just angle it back down into the hub and push it in.

Now you can take your upper control arm and push it back into the wheel knuckle.

Once you push it through, just put that 21mm nut on there to hold it in place.

Line up the axle and replace those 12mm bolts.

We'll fast-forward as Mike does this.

Now tighten each of those to 60 foot-pounds in a crossing pattern.

You can see we torqued that one.

Then you want to turn the wheel until you get the one on the opposite side.

Then torque that one.

You want to just repeat this process with each of them.

Now replace this 13mm nut and torque it to 20 foot-pounds.

Then replace that cap and just tap it into place.

If any of the lines on the back came undone, make sure you push them back in and re-clip

Then push your outer tire rod up to the wheel knuckle and replace the nut.

Then torque that to 111 foot-pounds.

Now just tighten up this bolt on your upper control arm.

If the stud spins, use a 10mm socket and ratchet.

Then you want to torque this to 111 foot-pounds.

Then tighten up the nut on the bottom of your sway bar link.

Jack up underneath the lower control arm to simulate a wheel being in place.

Then he lowers the vehicle and tightens them the rest of the way.

Then torque each of them in a crossing pattern to 120 foot-pounds.

Then just replace your hubcap and you're all set.

We hope this video helps you out.

Brought to you by www.1AAuto.com, your source for quality replacement parts and the best

service on the Internet.

We're the company that's here for you on the Internet and in person. 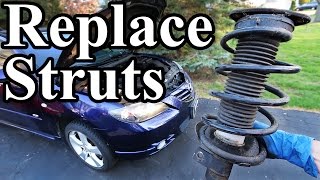 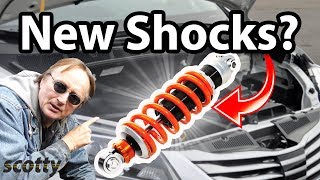 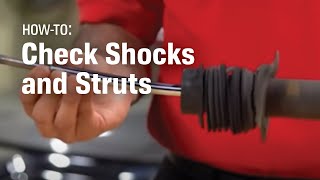 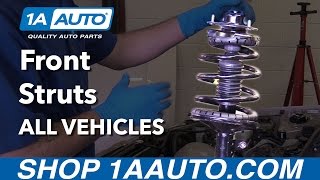 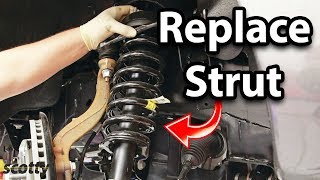 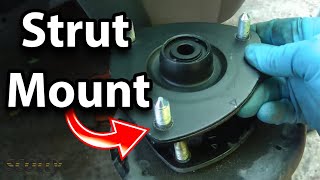 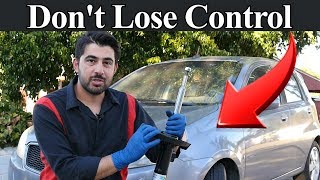 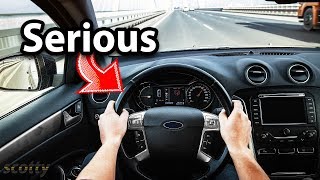 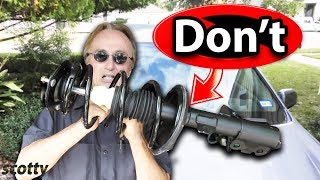